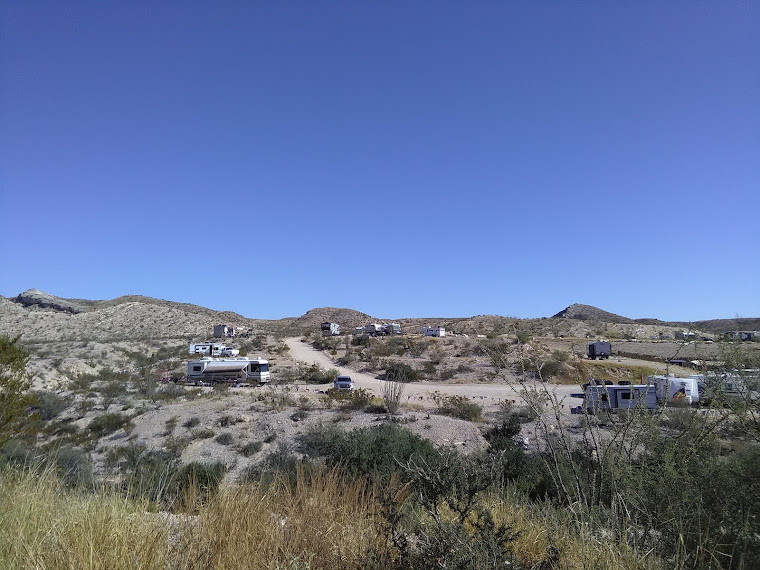 A little of everything

It had been a while since mother and I had gone for a ride.  I do not know if my low tire sensor is on the brink or if my tires were low but it sure lights up too often for my liking.

Town and Country was bought out by Stripes a couple of years ago and they did away with free water and air.  I would not call myself cheap but I do not like to have to pay just to put air on my tires.  So I drove to the lake to the only place in town that has free air without even having to fill up.

Wouldn't you know it, as soon as I took out my tire gauge the darn Chinese crap broke. I eye balled it and lucky for me the light went off.  Note to self:  get right front passenger tire checked before our next trip to Uvalde. 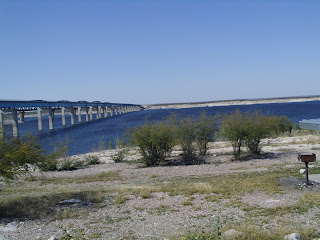 My favorite campground is very close to this gasoline station, so had to drive by it.  I am happy to report that there were quite a few campers at Governors Landing.

Both mother and I have eye issues, but quickly realized that it wasn't our eyes this time...the water was dark...almost blackish in color.  I do not know why the water was so dark...but it did not seem to bother boaters who were out in droves,  Upon further review, it might have been our eyes because here in the picture the water has a navy blue tone. 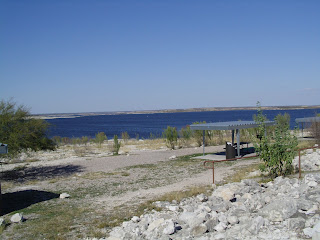 I have been looking for the 2016 calendars I bought back in August or September of 2015...I have yet to find them.  Was going through some boxes in Terlita (my camping van) when I came upon a big bottle of Tequila, a bottle of Mezcal and $111.00 from my 2012 trip to Terlingua!  Wish I had found it sooner, like the night the power went out.  Though I do not much care for Tequila (except in a frozen Margarita) it might have helped me pass the time until I could fall asleep.  I do not go to bed at 10:30 p.m. unless I am sick!

You might be asking yourself...if you do not like Tequila why did you buy a large bottle of the stuff? Besides scoring it at a great price, we have a tradition during the Chili Cook-off of taking a bottle of "whatever" and sharing it as we sit around a warm cozy campfire until the wee hours of the night.

Good night.  May you all have Terlingua Dreams.
Posted by MsBelinda at 11:50 PM 11 comments:

Last week we went back to the podiatrist for a follow up visit.  He asked me what ointment I had put on her feet...told him...the one you prescribed.  Turns out he never wrote it on her records.  He kept on giving me names and I told him I had no idea, so he asked me to call him when we got home so they could jot it down.

Then he asked me who cut mother's nails...WHT? He has been cutting her nails for three years...told him...you do!  One thing he did not forget was to remind us to vote for him.  I was so irritated at him that had I had my voter registration with me, I would have gone to early vote.  Del Rio deserves better, the last two podiatrists a husband/wife team left town in total secrecy and he is the only game in town.

Went to the post office only to find two more solicitations from flippers to buy my house in Houston. Five years ago I would get one or two a month, now I get two to three a week.  My house is not nor has it ever been up for sale. I have a yardman to keep up with the lawn. So why are they targeting me?  Just because I have an out-of-town address at the Harris County Appraisal District?

Even with the cooler temperatures all our trees are in bloom.  However, I have yet to start tackling the weeds :(

Good night.  May you all have Terlingua Dreams.
Posted by MsBelinda at 8:30 PM 7 comments:

The evening news was about to conclude when the lights went out around 10:25 p.m. last night.  If you have been reading me for a while you know that losing power for hours in particular in the sourthern part of Val Verde County is nothing unusual. 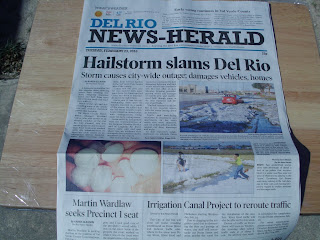 Del Rio does not have a local television station, we get our programming from San Antonio, Texas... 144 miles to the east of us.  Though they mentioned the possibility of heavy rain and hail in the western zone, that is a pretty broad area.

It had been raining but not heavily and there had been lighting and thunder but nothing out of the ordinary, at least not by mother's house to have triggered an electrical outage.  Thank goodness for my solar lights, we soon had lights in the living room, hall and bathroom (see mother my Terlingua gear can come in handy).

I wanted to write a new post but from past experience know that if the power goes out for more than an hour in particular at night, it is not going to get fixed until the following day.  Our home phones are wireless, so plugged in our old fashion landline phone which always works in situations like this. I went to my room and reluctantly tried to go to sleep.

Got up at six to give mother her medication and we were still without power.  Decided to go buy breakfast at Stripes, just to be on the safe side called, but no one answered.  For some reason decided to call HEB and their telephone went directly to their answering system.  That is when I concluded that perhaps the outage might be city wide.

This is when I thought perhaps having a smart phone might not be a bad idea, at least I could check the City of Del Rio Facebook page https://www.facebook.com/CityofDelRio?nr.  This eveining I did so and found that all Verizon and 911 service went out as well...so I guess I do not need a smart phone after all.

Power finally came back on at 9:38 a.m. 11 hours and 13 minutes later.  It wasn't until I was watching the news at noon that I learned of the heavy hail that fell and all the damage it caused in town.

I looked at our local newspaper webpage and as usual...worthless!  Went to El Zocalo webpage and not only got pictures but also a video. No need to know Spanish, videos need no translation http://www.zocalo.com.mx/seccion/articulo/danos-severos-por-granizada-1456221887

Email ThisBlogThis!Share to TwitterShare to FacebookShare to Pinterest
Labels: hail in Del Rio, no power for 11 hours

On our last trip to Uvalde, we got home late.  Perhaps, I should clarify that, it wasn't late...it was past sundown.  As I have mentioned previously...my night vision leaves a lot to be desired.

Since our almost tragic trip to Uvalde last year when we had a simultaneous run in with an 18 wheeler as well as a deer...I tend to feed the dogs more than well so they can hang on until someone can come to their rescue in case of our demise.

We had just crossed the Duck Pond on the way to Mom's house when I spotted a dog that looked a lot like Tammy (named after Tammy Wynette).  She is the only dog that is not tied up, so I wondered why she was so far from the house when I left her plenty of food.  She is a stray after all, so I did not give it much thought.


As soon as we pulled into the driveway, I was surprised to see  her waiting for us.  That meant that dog was not Tammy.

It could have ended right there, but two days later she brings home this dog that could be her brother and who looks so much like her.  I know many of you are not familiar with my other blog...Walter's World...that is where I go more into detail about the critters at the Del Rio branch of Terlingua Dreams http://mylittlewalter.blogspot.com/

I already take care of three strays and the last thing I wanted was to take on another one.  However, how can you say no to a poor hungry dog with a bum leg?  Wish I could find homes for all of them but in Del Rio it is hard to find takers for full grown dogs.  I was fortunate to be able to adopt out Tammy's last litter of five puppies.

Hope you all have a happy Valentine's Day, with your sweetie.  Since I do not have a sweetie (AKA my tall weathered cowboy)  I will spend it with my three men...Pedrito, Boris, Oscar and little Tammy.

Good night.  May you all have Terlingua Dreams.
Posted by MsBelinda at 11:58 PM 16 comments:

Email ThisBlogThis!Share to TwitterShare to FacebookShare to Pinterest
Labels: Oscar the new man in my life

Here it is not even half way into February and the temperatures are in the 80's.  The trees want to bloom, the weeds are staring to show their ugly selves and those horrible mesquites are springing to life...:(

I really need to get it together and tackle the yard while it is still doable. How can the weeds be so green when it has not even rained?  God, I hate yard work!


We went to the Podiatrist and I was a bit taken back at how friendly he was. It did not take long to find out why. Turns out he is running for Congress, even passed out cards so we would vote for him, lol.

We got our water bill and it was horrible, guess I will have to stop procrastinating and call a plumber but I have to do it without my mother finding out or she will place a call to hers.  He did such a good job installing the cut-off valve that it doesn't even work!

I apologize as I have not had a chance to answer e-mails but I promise to do so this weekend.

What can I say, I love MY Spurs!  Last night's game against Orlando was a nail biter but we got the win.