Does anyone use Photobucket or other photo upload site?

I joined Photobucket back in 2011 when you could upload all the images you wanted to their website.  I did this because I used to have dial-up internet and other versions that were equally as slow.  If I wanted to upload images to my blog I had to go to the local library to do so.

Photobucket has changed their policy over the years and as a consequence, I have lost many images from my blog. This was as a result of their third-party hosting that at one point cost $299.99 per month...just a tad too much for my budget!

Have been receiving a lot of e-mails from them to let me know that they currently will only host 2.5GB's and I am over my limit so have to delete images or pay for the additional space. I do NOT want to pay anything!

Their price for an Intermediate user if I choose to be billed annually is $5.83 monthly for 25,000 photos and 250 GB's. Anyone have any suggestions?

Good night.  May you all have Terlingua Dreams.
Posted by MsBelinda at 10:01 PM 10 comments:

Is my CRS progressing?

I bought two items almost two weeks ago and for the life of me could not find them.  Has my CRS progressed?  Had even considered that perhaps I had thrown them away.  After days of looking for them, I accidentally found them hanging in my closet.  Boy was I happy!

Drove into town this afternoon and promptly returned them.  Was going to stop at Whataburger to buy me a patty melt but since it was dinner time the place was packed. Decided to go to Jack in the Box instead to try their sourdough version of a patty melt.  I will be kind...I do not plan on doing that again!

Needed to run more errands but decided to head home instead since my night vision is bad.  This is when I noticed that it is getting darker later so at least I had more daylight to get home.

Good night.  May you all have Terlingua Dreams.
Posted by MsBelinda at 10:11 PM 10 comments:

We had a beautiful sunny winter day in the 70's today. This evening a cold front is supposed to come our way and go down to the '30s.  I am not complaining though, I have seen how cold it is supposed to get up north. My friend in Chicago is seriously questioning WHY she is even there.

Have tried to go to the laundromat but all the ones I have passed by are too full for my liking.  Decided to do some hand washing to take advantage of the strong winds that hit us this afternoon and glad I did.

Gasoline prices are on the rise but I was still lucky enough last week to fill up at $1.99 a gallon for unleaded gasoline.

Email ThisBlogThis!Share to TwitterShare to FacebookShare to Pinterest
Labels: $1.99 a gallon regular gasoline, A beautiful day in the 70's, gasoline prices on the rise

The local library opens at 10:00 a.m. and I was there with my previously lost but now thankfully found box of checks. For some unknown reason, the County tax assessor-collector decided to break down the 2018 property taxes into two bills one for the regular county taxes and another for SFDR ISD taxes (school taxes).

At the library, unlike mother's house, I have a lot of room to spread out and plenty of natural light to aid my poor eyesight.

Today was also the last day to pay the Post Office box rental before new rates go into effect on Monday, January 28th.  By the time I got there they had a "Gone to Lunch" sign which I thought odd since the partial government shutdown did not affect them.

Headed for the County Courthouse only to find a very long line and not so happy people who like myself did not like to have to write out two checks per property.  The ladies taking the payments were equally pissed as it doubled their work.  They were not consulted, the citizenry was not consulted and no one was happy.

Headed back to the library since I am having problems with all these images popping up on my home computer from sites I have visited...it started doing the same at the library but on a lesser scale.  Have no idea how I am going to fix this.

I am missing my Spurs but tonight I did watch the Toronto Raptors vs Houston Rockets.  I am not a fan of either team so I had no idea that Austin Rivers was now a Rocket.  I know a lot of Rocket fans read me so could someone please tell me when did this take place and why?

I thought Austin Rivers and Chris Paul did not like each other?  How did they end up in the same team after both being LA Clippers?
Posted by MsBelinda at 10:25 PM 10 comments:

Does anyone use VPN's ?

Do any of you all use VPN's (Virtual Private Networks)?  I have been hearing more and more about them but not sure if to jump on the bandwagon.  I spend a lot of time on public wi-fi (doctors offices, hospitals, motels, fast food establishments) and I certainly do not want to get hacked!

My ISP is Spectrum and they provide their users with free McAfee Anti-virus protection but lately have been pushing another feature which name escapes me at the moment McAfee Safe Connect as well as TunnelBear Secure VPN service.  When did using the Internet get so complicated?

Since it is morning can not wish you a good night and Terlingua Dreams.  So have a great day instead!
Posted by MsBelinda at 9:50 AM 16 comments:

My cheap camera finally bit the dust.  I have been going outside all evening trying to get a glimpse of the lunar eclipse. Tried to take a picture using my equally cheap cell phone but it was a bust. So decided to "borrow" one from the Internet. 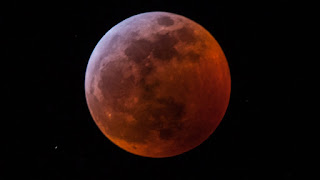 I am wearing two jackets and just checked the temperature it is 46 degrees Fahrenheit and had to laugh at myself because I am freezing!

Need to find the camera I bought myself during Black Friday.  It must be somewhere in my bedroom, just remember opening the package to make sure everything was there and then putting it away until I had time to read the instructions.

Maybe in two and a half years if I am alive I can catch the next complete lunar eclipse I missed this evening.

Good night.  May you all have Terlingua Dreams.
Posted by MsBelinda at 9:59 PM 8 comments:

It is that time of the year...time for decluttering...

It seems every other e-mail I receive from Ikea, Home Depot, Walmart, AARP, etc. etc. reminds me that it is time to declutter.  It is easier said than done :-(

Wish I was like Barney (OFM Adventures) who is ruthless when it comes to getting rid of things he no longer uses or needs.

I have wanted to purchase a shed or small cabin so I can get the boxes I brought down from Houston when I moved back to Del Rio a place of their own besides my small teenage bedroom.  Yet deep inside of me I know that I need to get rid of them rather than stockpiling them.

We do not have a Goodwill, Salvation Army or other charity organization besides a local church where we can donate our gently worn clothing items.  Taking them to San Antonio or Houston to donate would use up valuable cargo space.

Good night.  May you all have Terlingua Dreams.
Posted by MsBelinda at 8:23 PM 11 comments:

Why would they want to attack the City of Del Rio?

The talk around town is all about the Ransomware Attack the City of Del Rio computer system recently suffered at the hands of cybercriminals.  Why in the world would they want to target us? All payments are being done manually.  They still do not know if anyone's financial data has been compromised. The good thing is that the FBI and Secret Service are now involved.

It has been cool at night, we have actually been having winter-like temperatures...I sure do not want to see the electric bill this month, last months was bad enough!

Good night. May you all have Terlingua Dreams.

This evening I did not realize the Spurs game was being shown on two channels.  A local San Antonio channel and nationally on ESPN.  I had it on ESPN, I can not believe how dismissive the male sportscasters were to the comments made by Doris Burke.

Belinelli and Bertans were great tonight.  Held my breath on the last play of the game.  Glad we got a win this evening!
Posted by MsBelinda at 8:00 PM 12 comments:

It has been a little chilly this past couple of days but fortunate that the rain was on the light side and that the icy conditions did not materialize.

Yesterday I made Caldo de Pollo (chicken soup) and it actually came out ok, I would give myself a C+.

I am so glad I stocked up on groceries because I do not want to be out in this weather.

I am really looking forward to tonight's game against the Toronto Raptors.  Do not promise that I won't boo Kawhi even if only from my bedroom :D

This evening I watched the OKC Thunder vs LA Lakers and their fans booed  Paul George and he was never even part of the Lakers roster!
Posted by MsBelinda at 11:56 PM 16 comments: