With all the computer problems I have had and to some degree continue to experience...I was not able to upload this post until tonight.  It is a bit out of sequence and for that I apologize.

The last time I had been to Ciudad Acuna was back on July 9th http://terlinguadreams.blogspot.com/2014/07/july-2014-trip-to-ciudad-acuna-coahuila.html

Decided to go on September 2nd since I knew that with the Labor Day holiday behind us, I would not run into crowds and that was definitively the case. There were no lines to cross into Mexico. 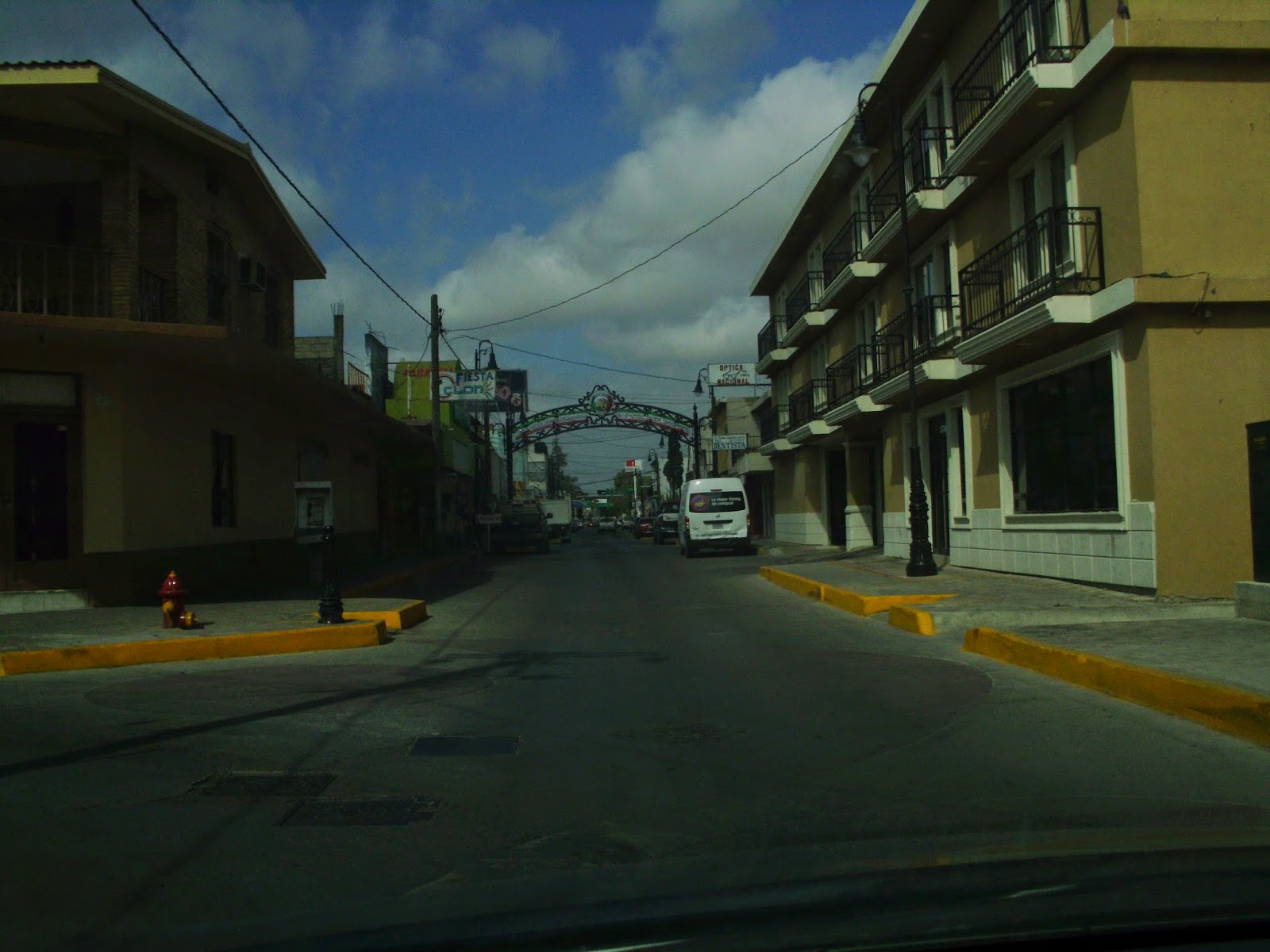 Mexico celebrates its independence on September 16th so many streets and businesses were starting to get decorated with the traditional flag colors of red, white and green. 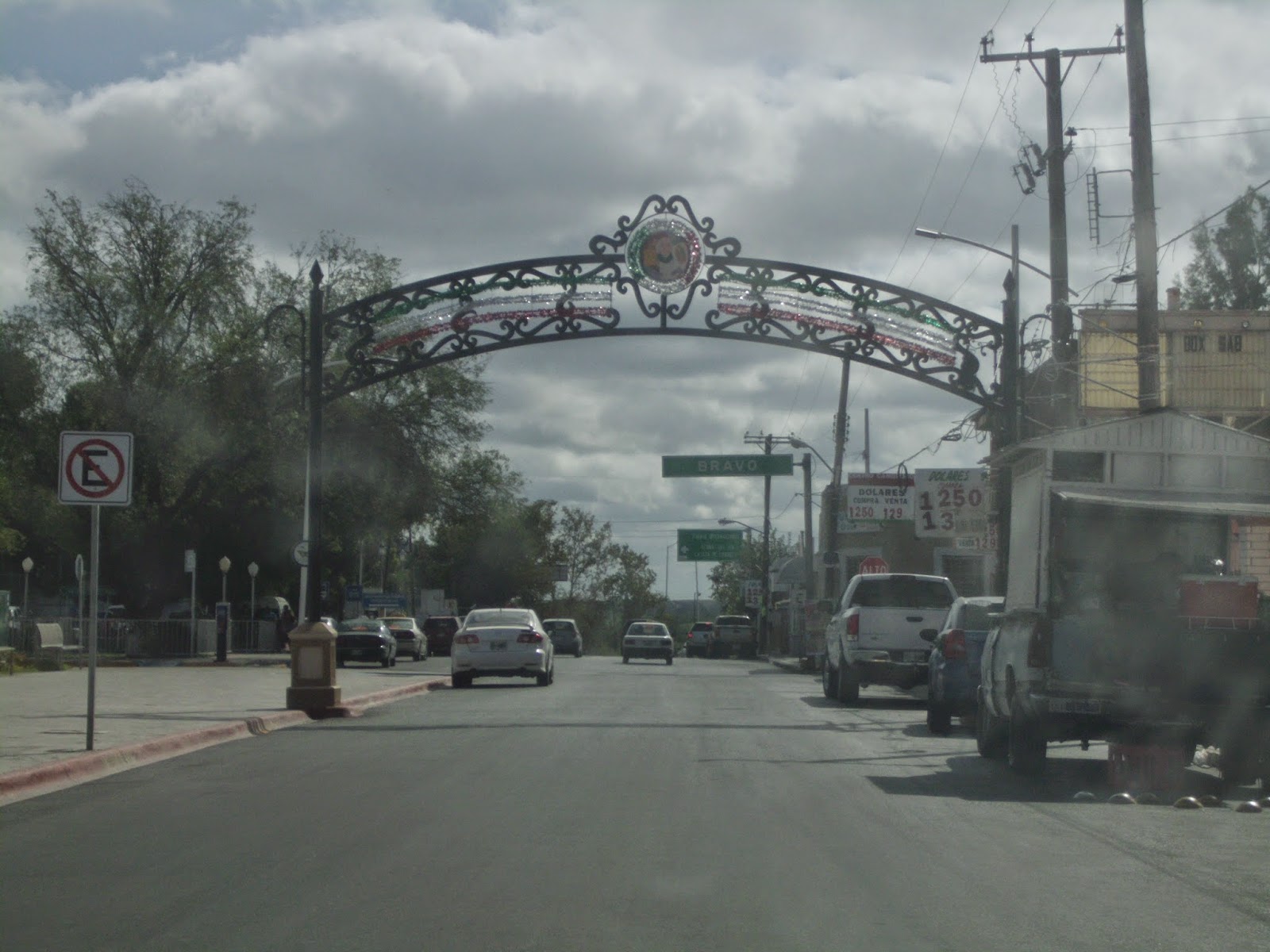 El Palacio Municipal, the equivalent of our City Hall was also getting spruced up for the occasion. 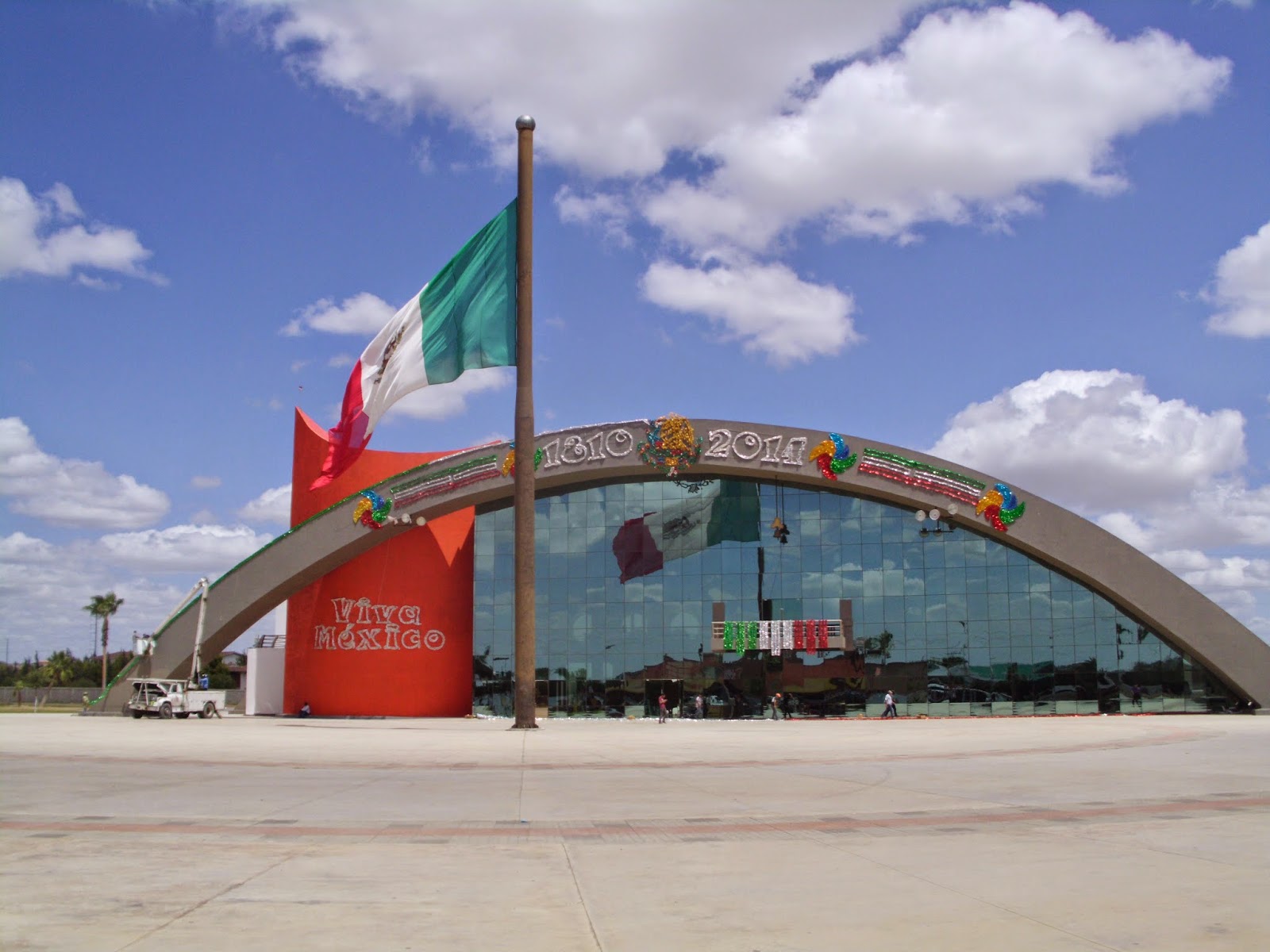 Here a man with no ladder...just some kind of a harness around his waist and a machete...is pruning the dead palm leaves. 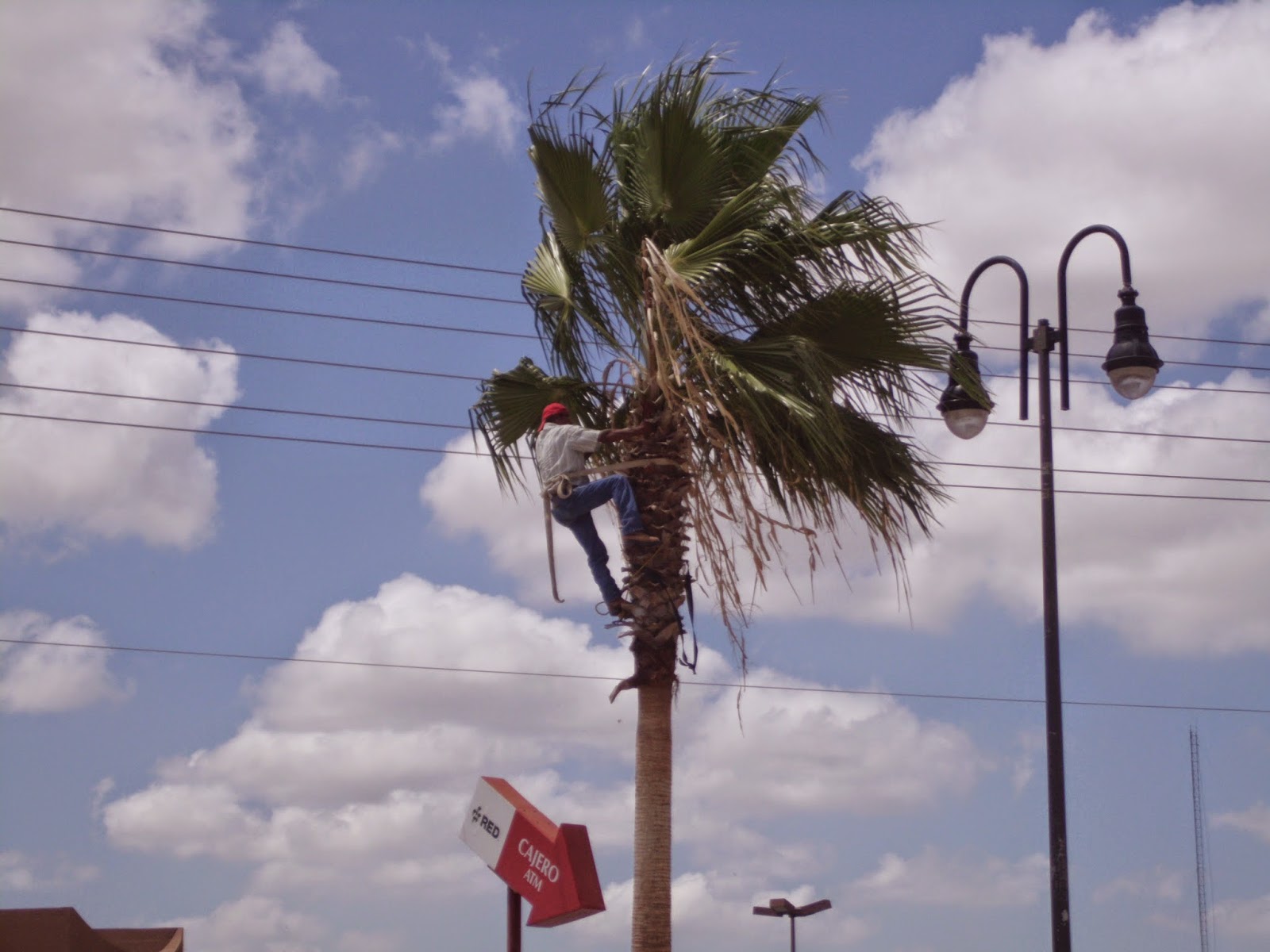 He had an audience watching him from a safe distance... 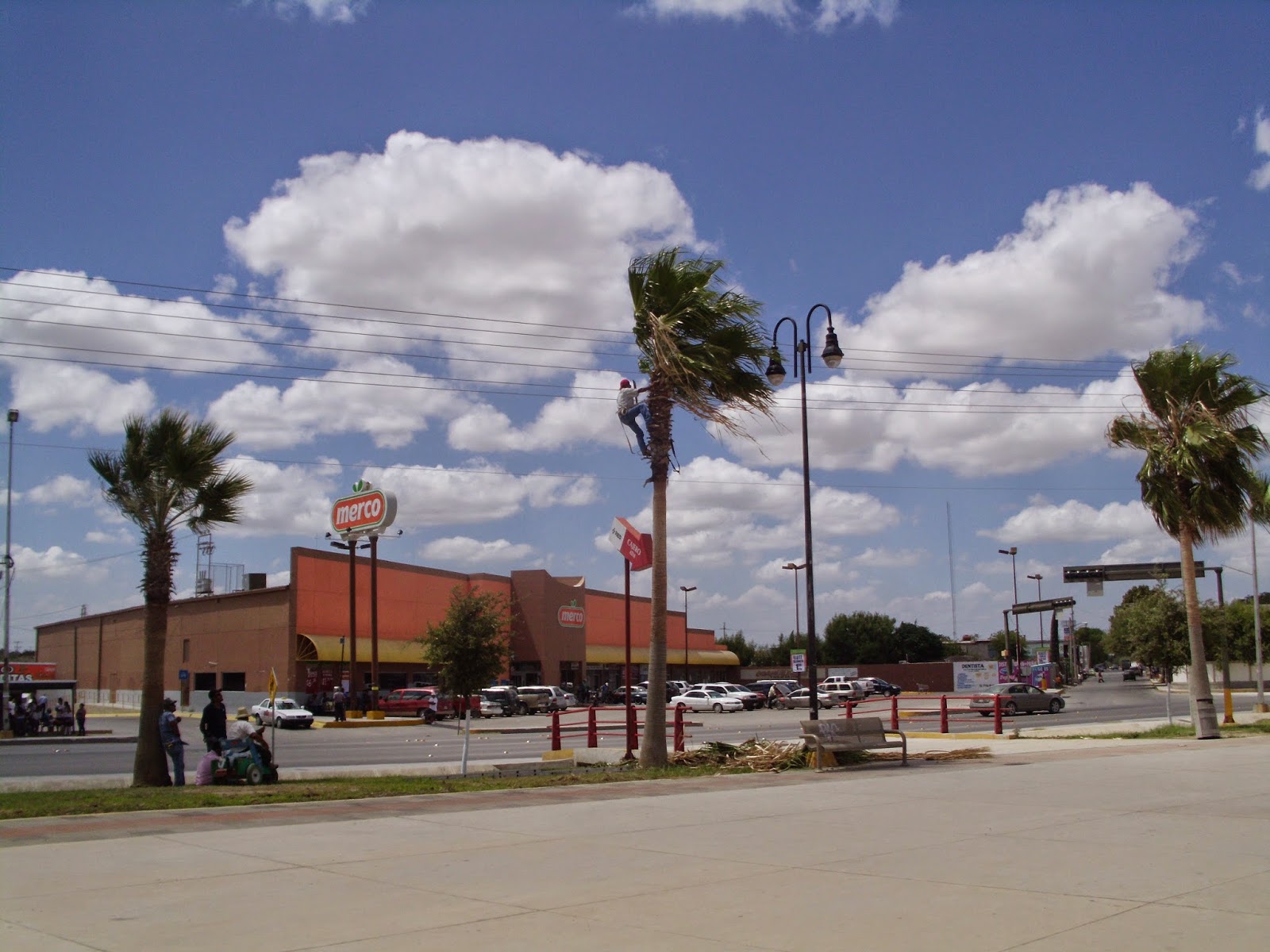 This area is known as the Micro Plaza and it is huge. This is where they hold all types of events.  You typically see many people walking, jogging and riding bicycles. If you need new soles for your shoes after all that walking, you can get them repaired at this little mini repair shop across the street from the Micro Plaza. 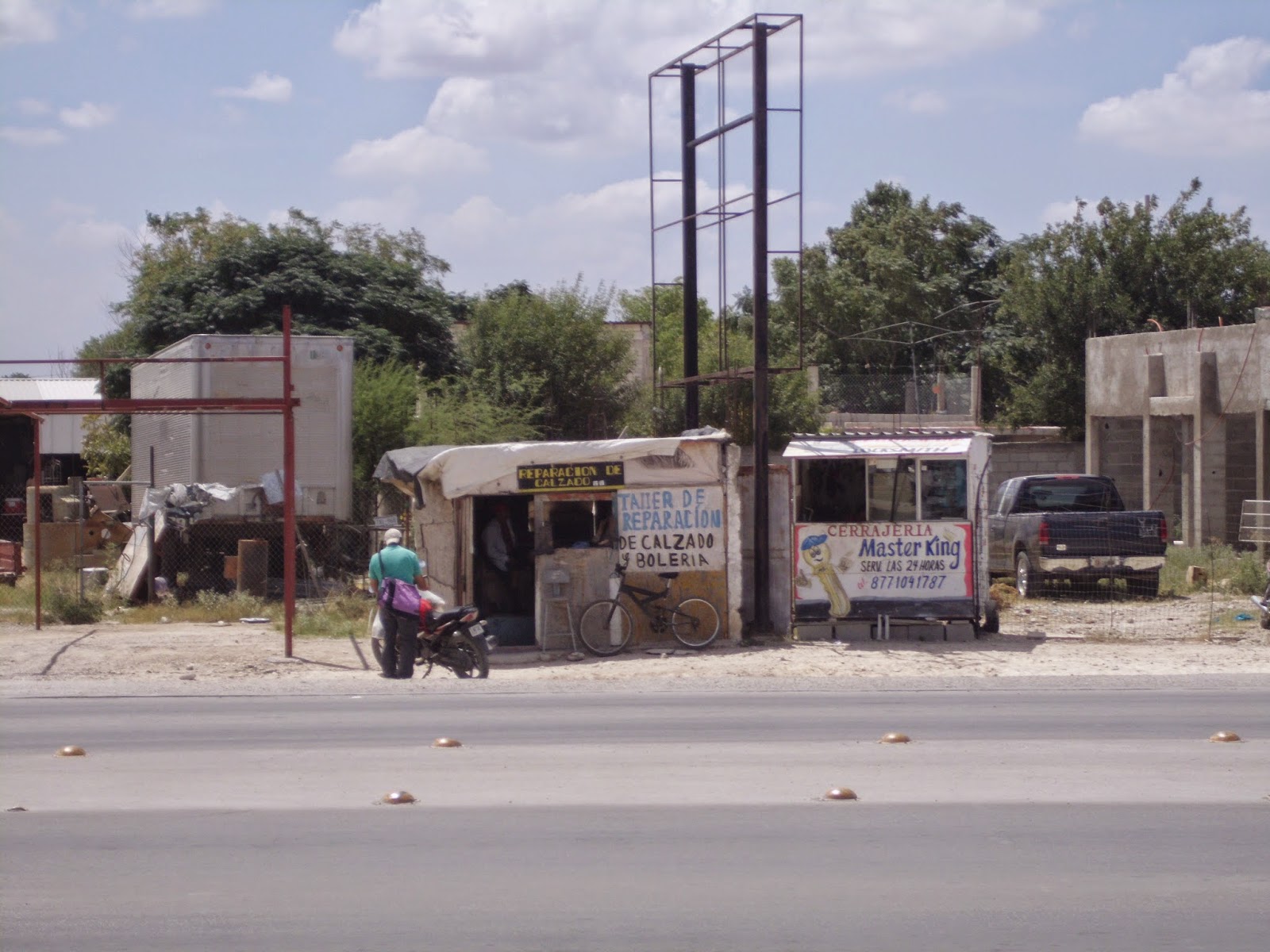 If all that exercise made you hungry you can grab a torta. 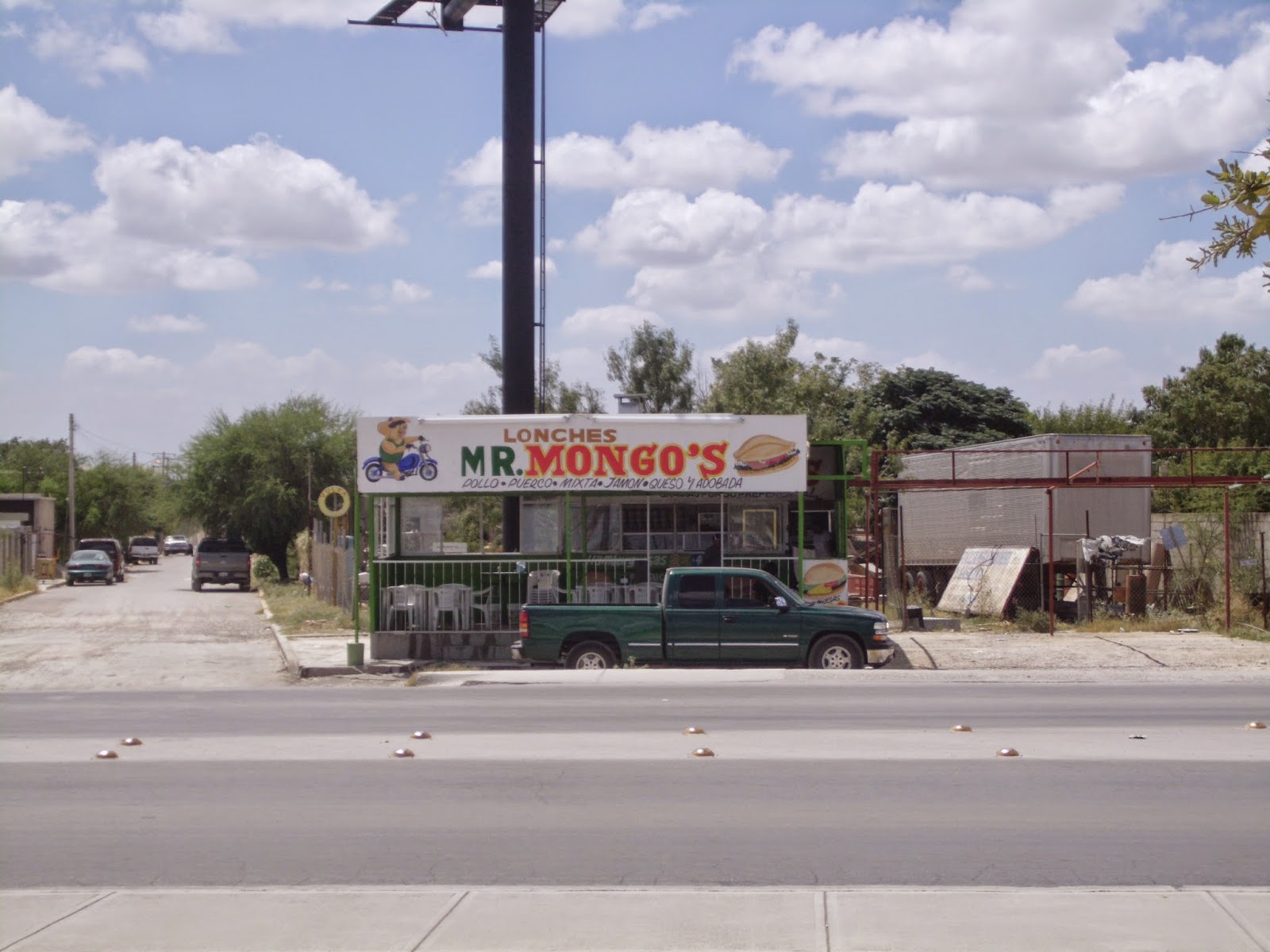 Today I went shopping at Bodegas Aurrera (owned by Walmart) because they were offering very good prices on cosmetics.  Pond's Oil Control press powder as well as Pond's Angel Face were selling for $20.00 Mexican pesos the equivalent of $1.60 American dollars.

I also bought two mascaras one for 18.20 and another for 24.90 Pesos or $1.46 and $2.00 USD respectively.  You will NEVER purchase them for that price in the States. The reason being that many American brands have factories in Mexico. 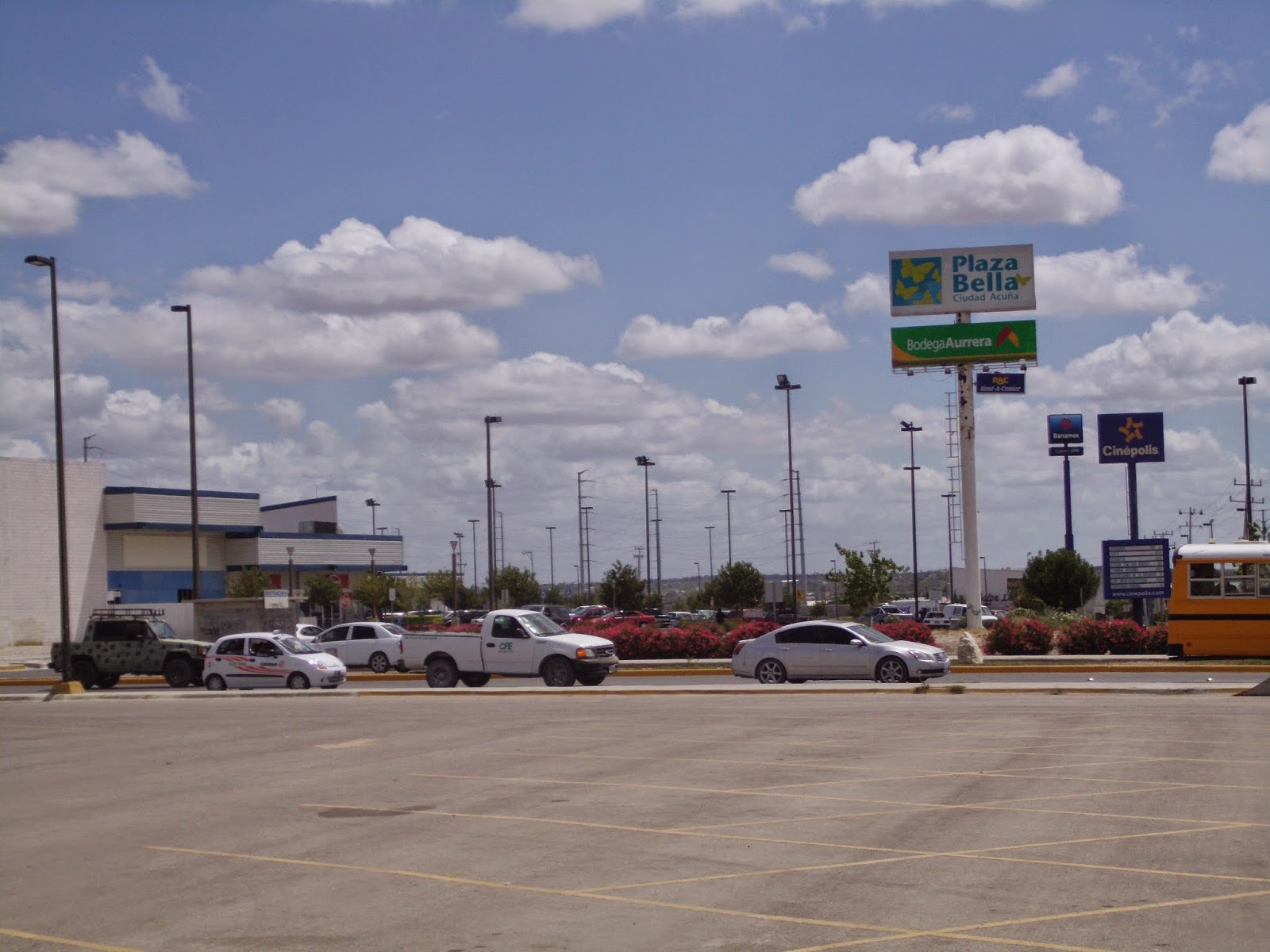 On the road I saw this small car with two ladders on board (property of a Mexican telephone company).  Just goes to show where there is a will there is a way.  Imagine all the extra stuff I could take to Terlingua if I were to equip my car with these :) 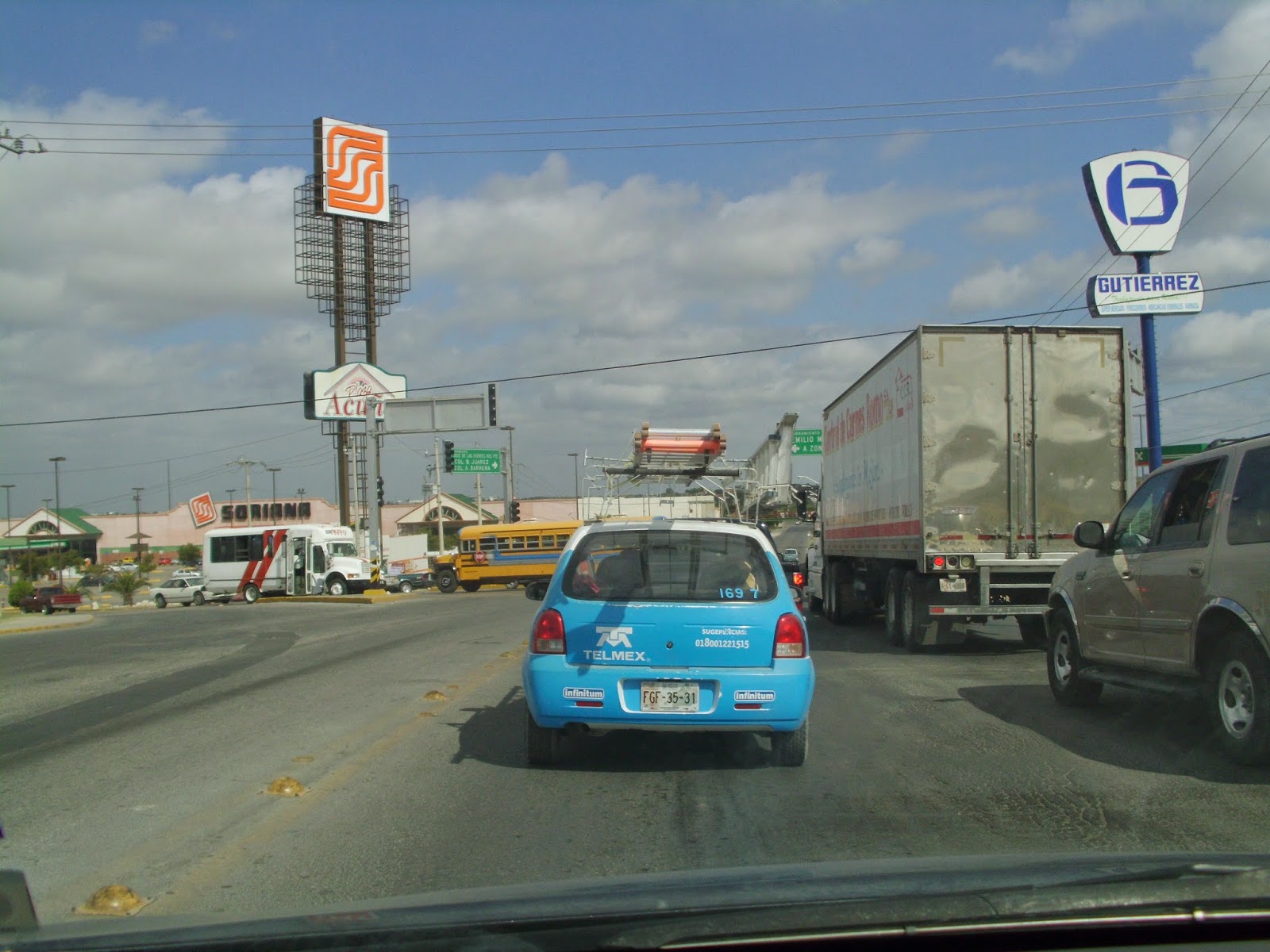 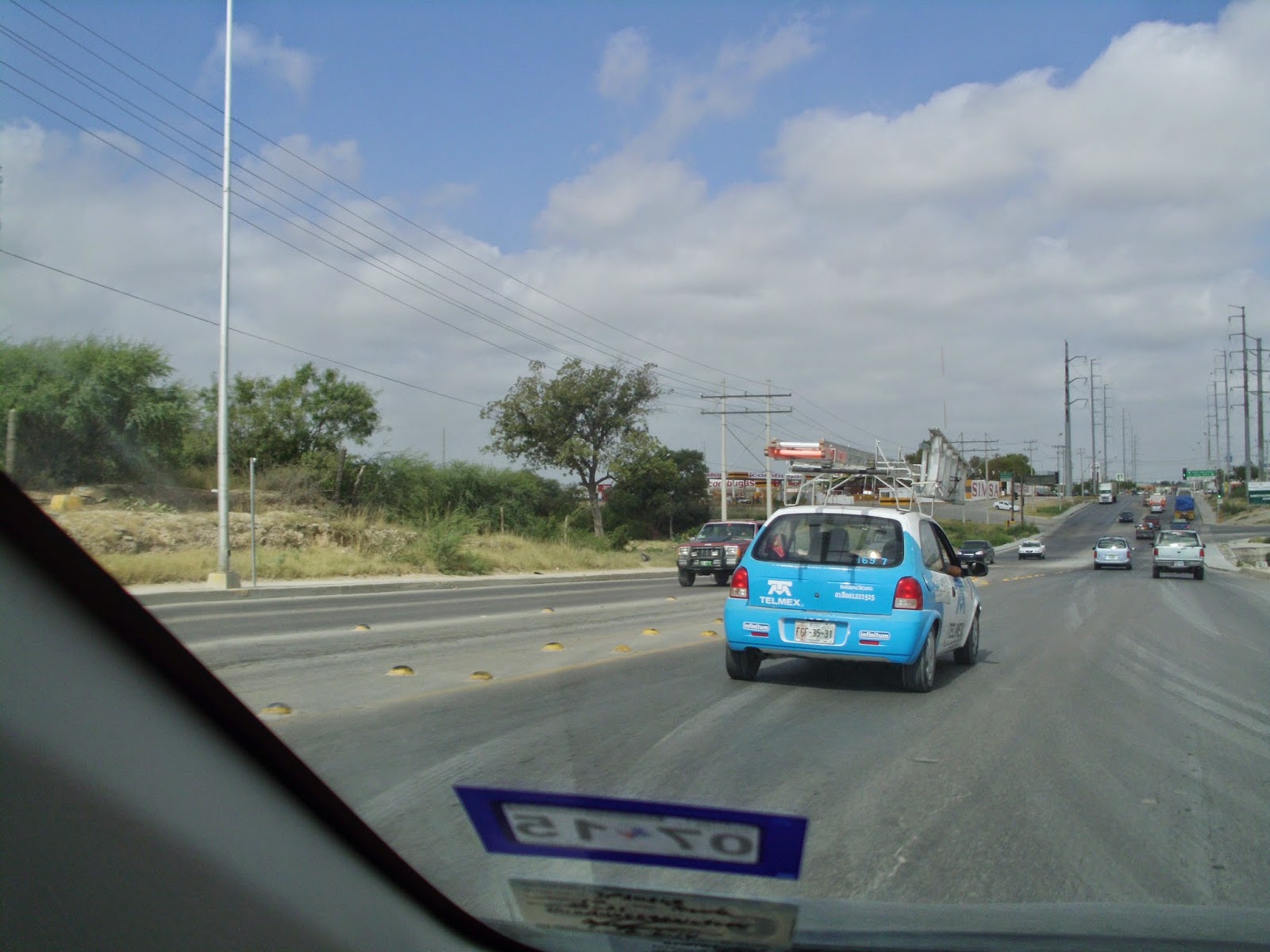 Exchange rates were varied along Exchange Rate Alley.  Good for American selling their dollars...but bad for Mexicans wanting to buy US dollars. 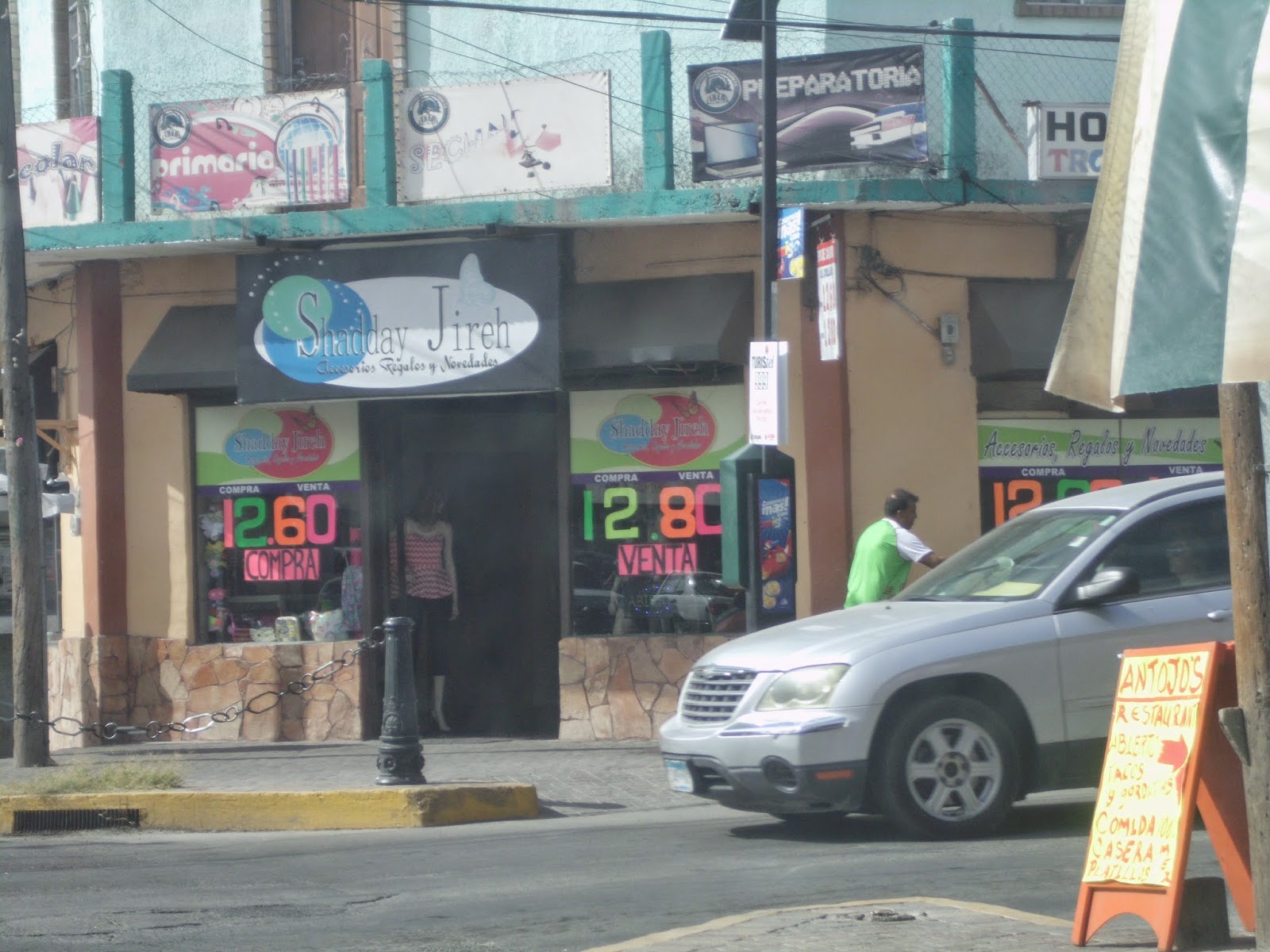 To give you an idea of what I paid for my purchases today I used an exchange rate of $12.50 pesos to one U.S. dollar since that is what I paid the last time I bought Mexican pesos. 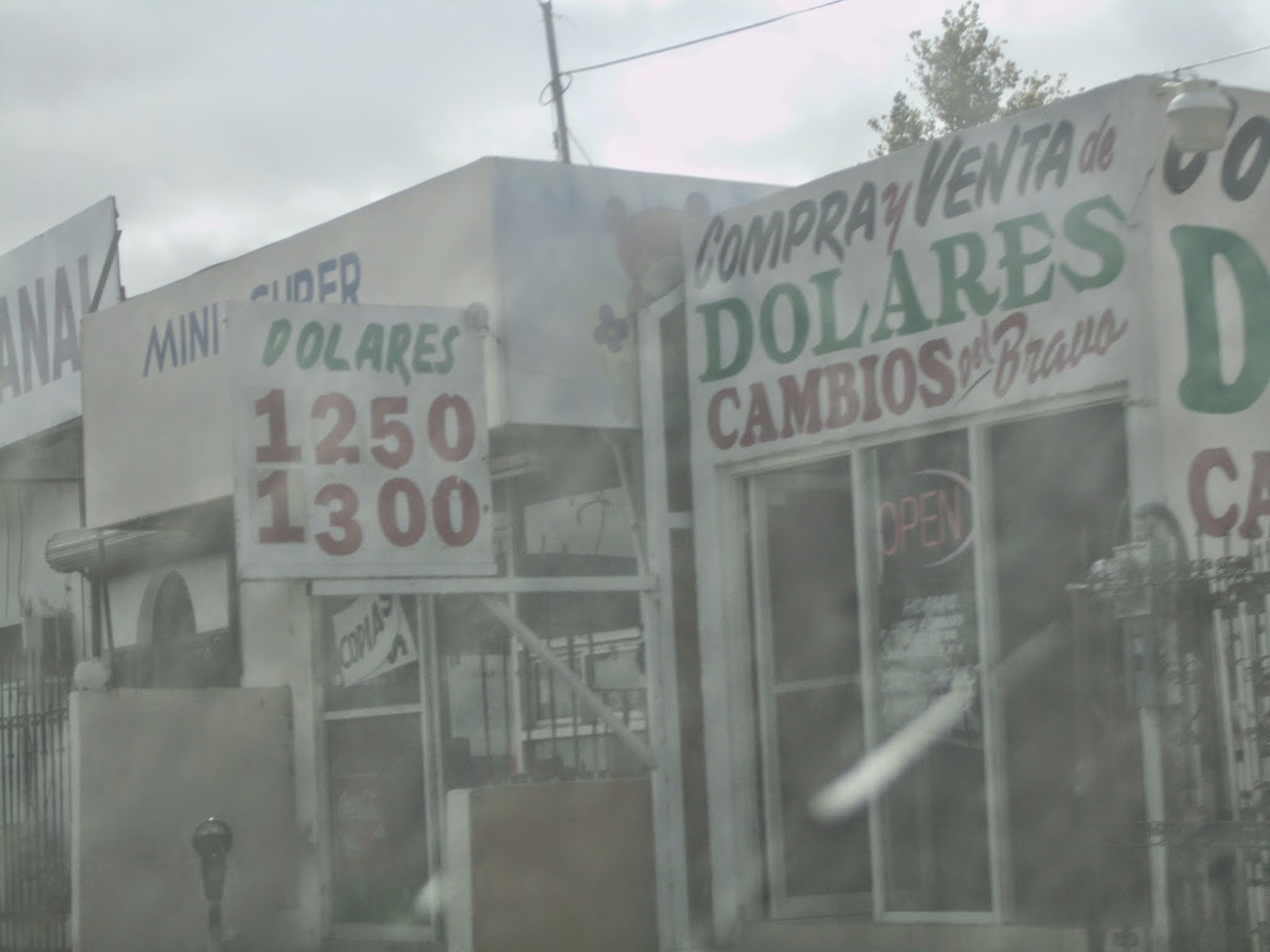 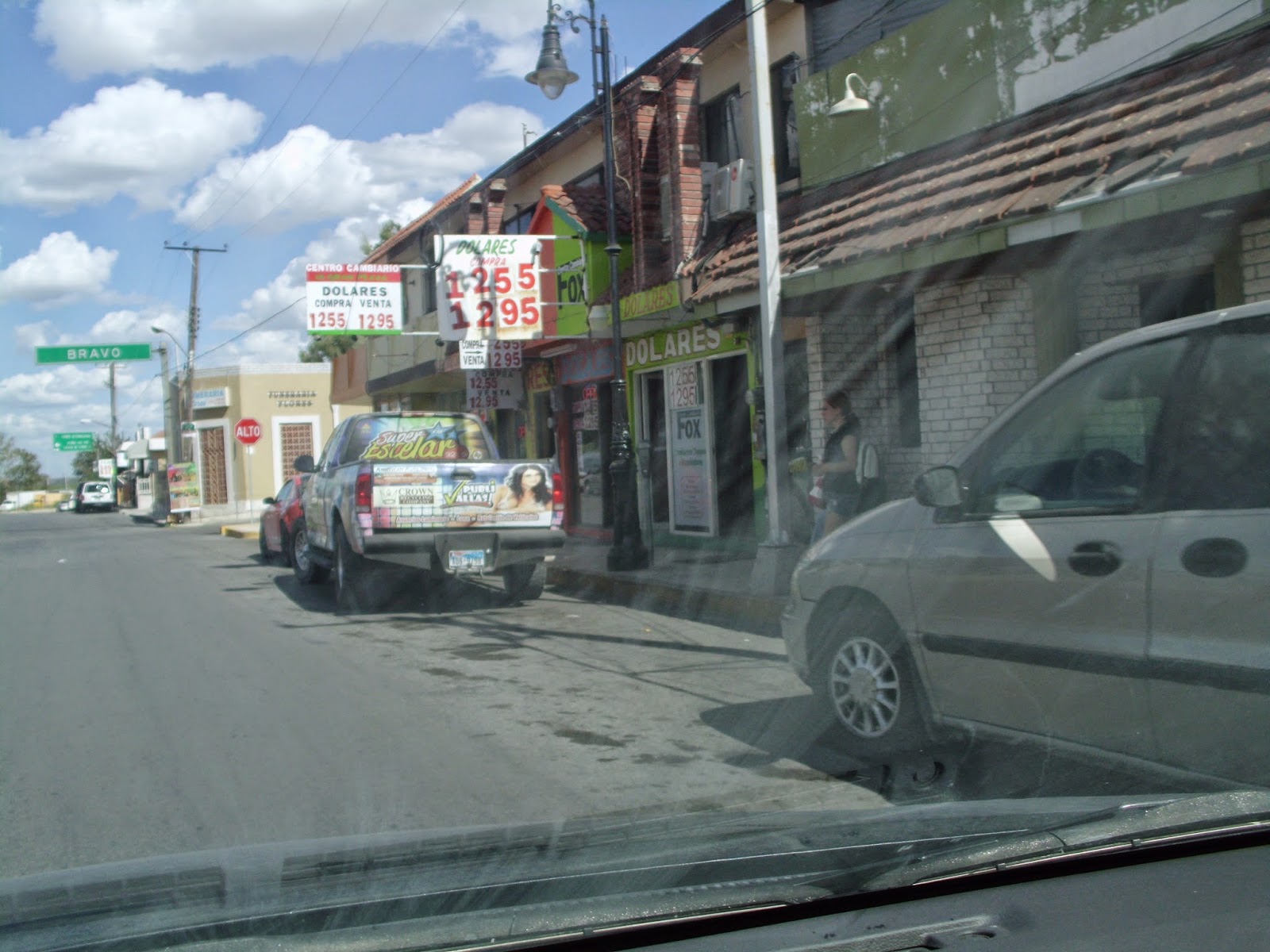 When I got sick last December we went through all of our supply of milk as I was unable to drive to the store.  While it is great to be able to drink real milk...it is nice to have powdered milk as a back-up. 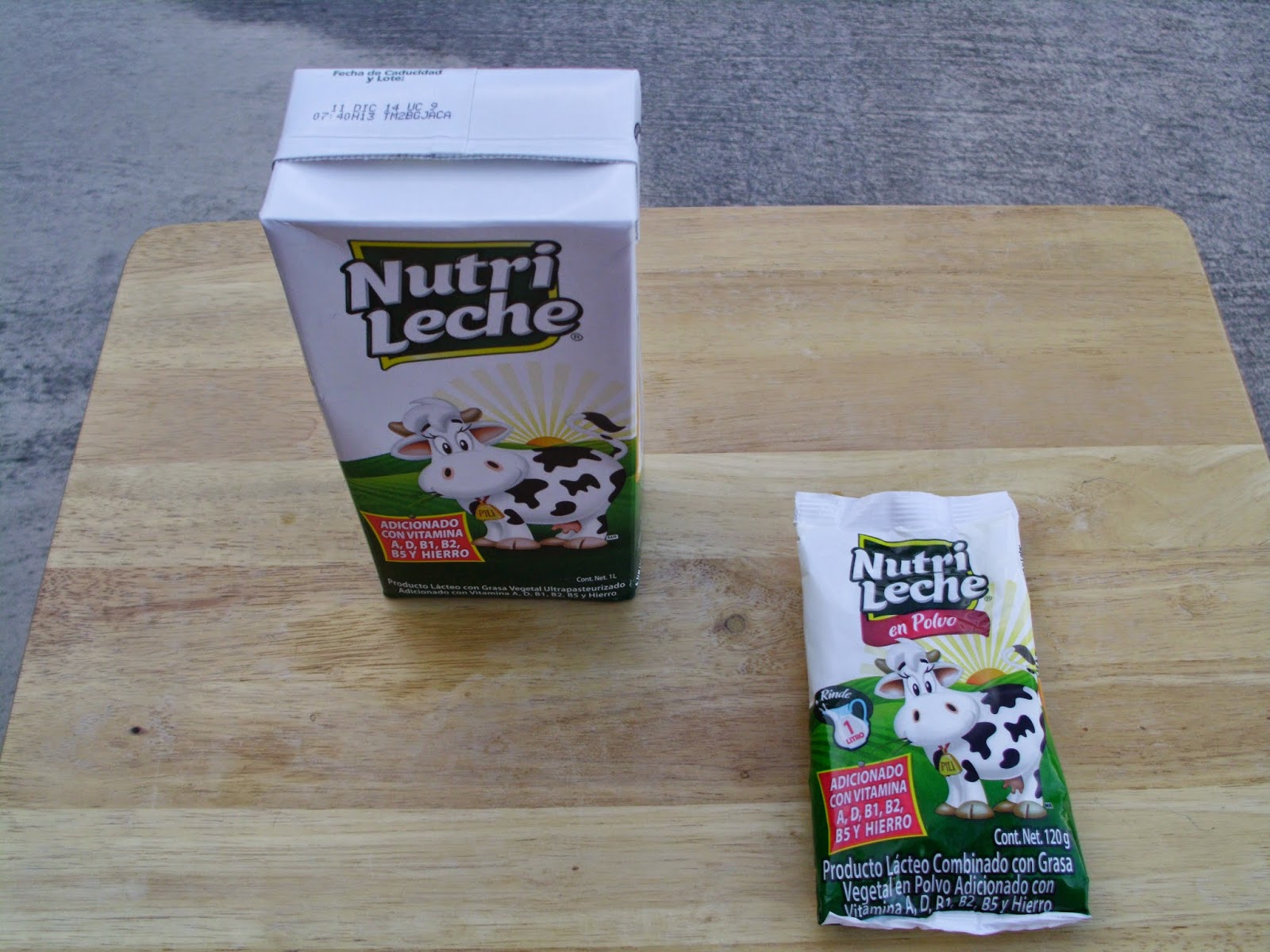 Went ahead and bought these for my future trip to Terlingua. The one on the left is milk that does not require refrigeration even in extreme desert conditions and a little package of Nutri Leche powdered milk.  Nutri Leche was $12.30 pesos / .98 cents and the little one cost 9.00 pesos / .72 cents.

Why do you drink so much milk Belinda?  I have to be self-sufficient in the desert and though I go in with another camp that actually brings and cooks the food...last year they did not attend.  Since I do not know how to grill nor do I have space to bring cooking stuff...I eat cereal.

This is the first time I see Borden's milk that also does not require refrigeration being sold in Mexico.  It sells for the equivalent of $1.19 USD. 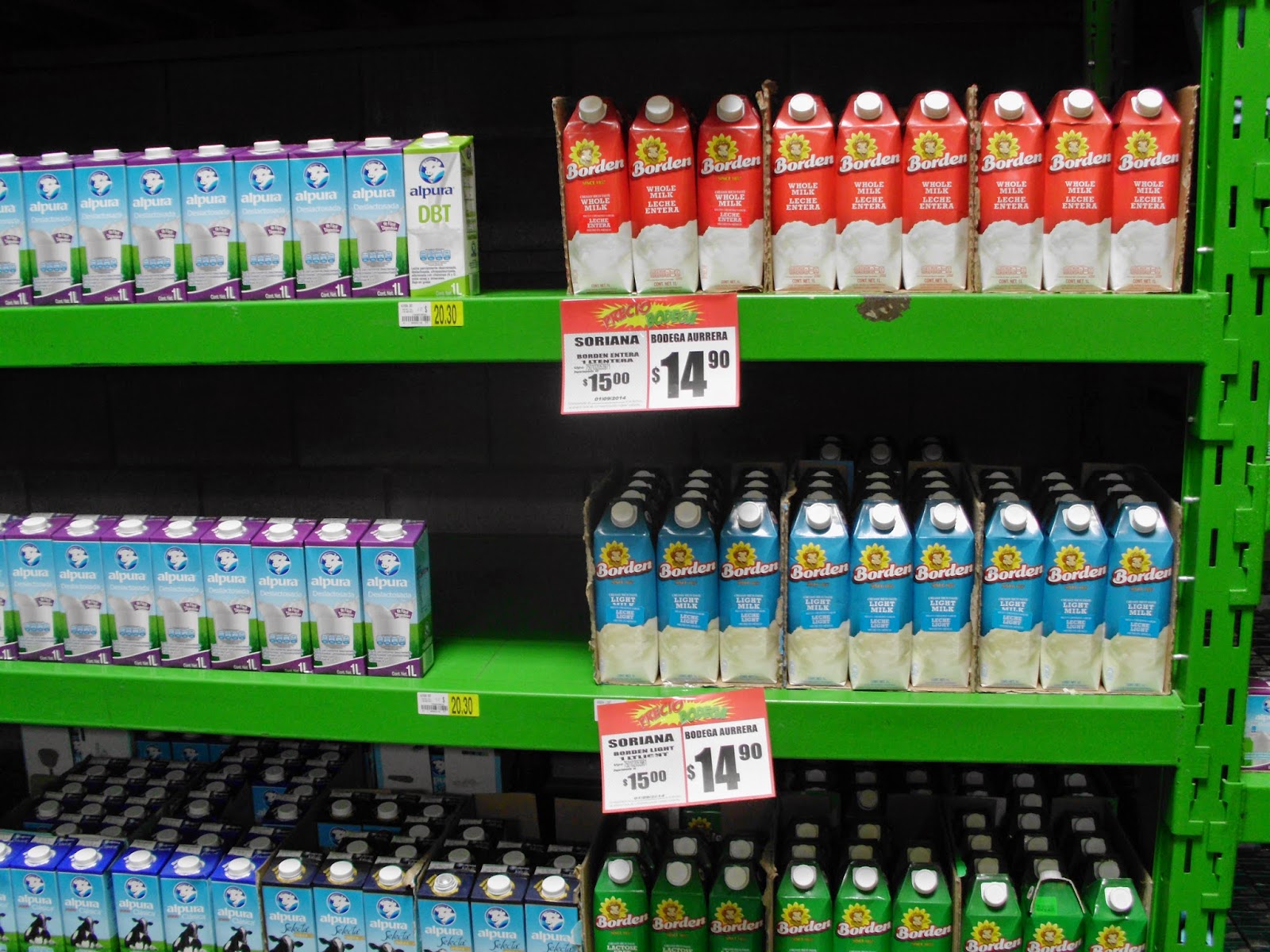 They finally got a new crossing rate sign as the other one was all patched up from the increases. It costs 26.00 pesos to cross back to the USA or $2.08 American dollars. 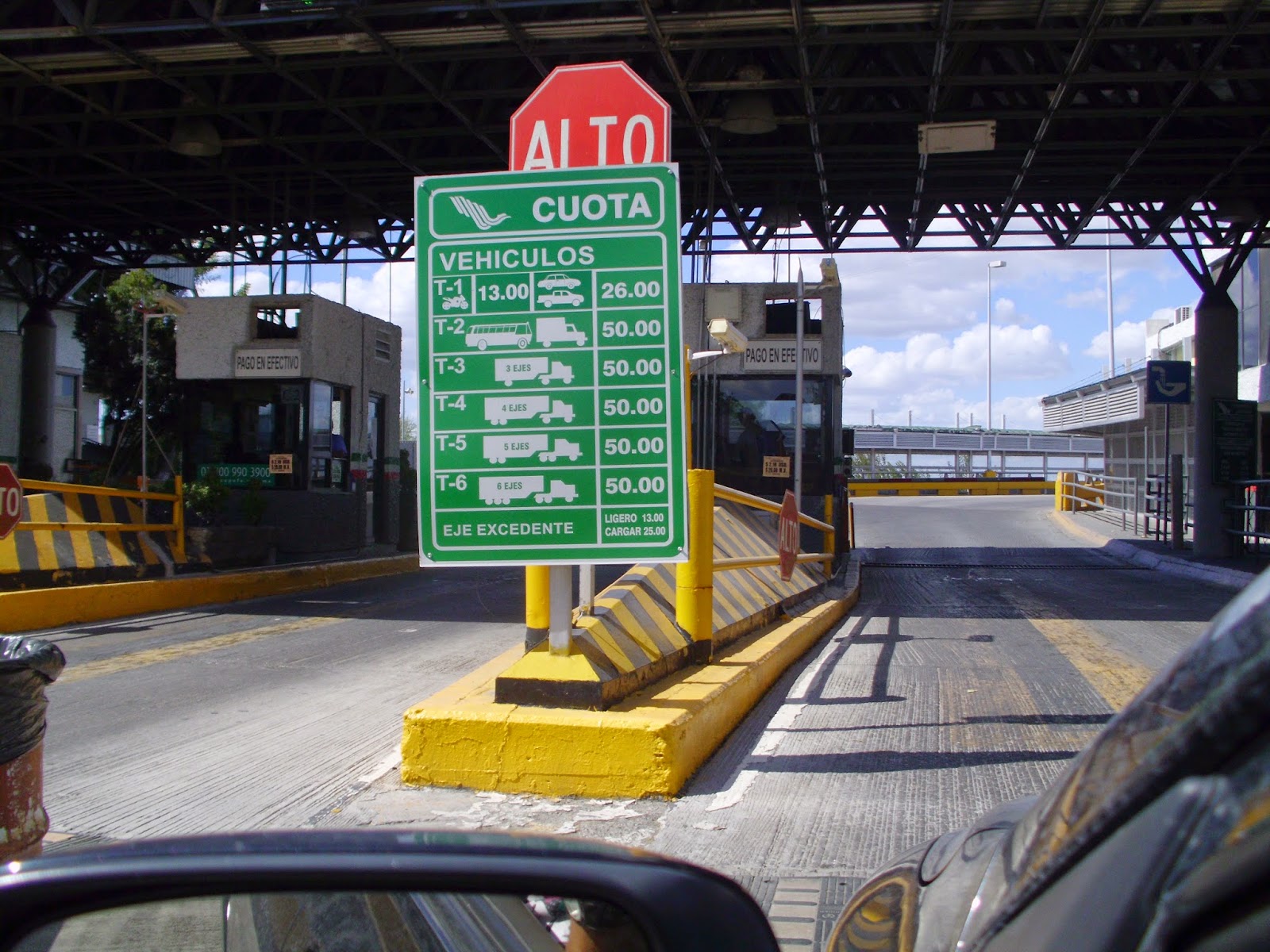 As you can see I had the bridge all to myself coming home. 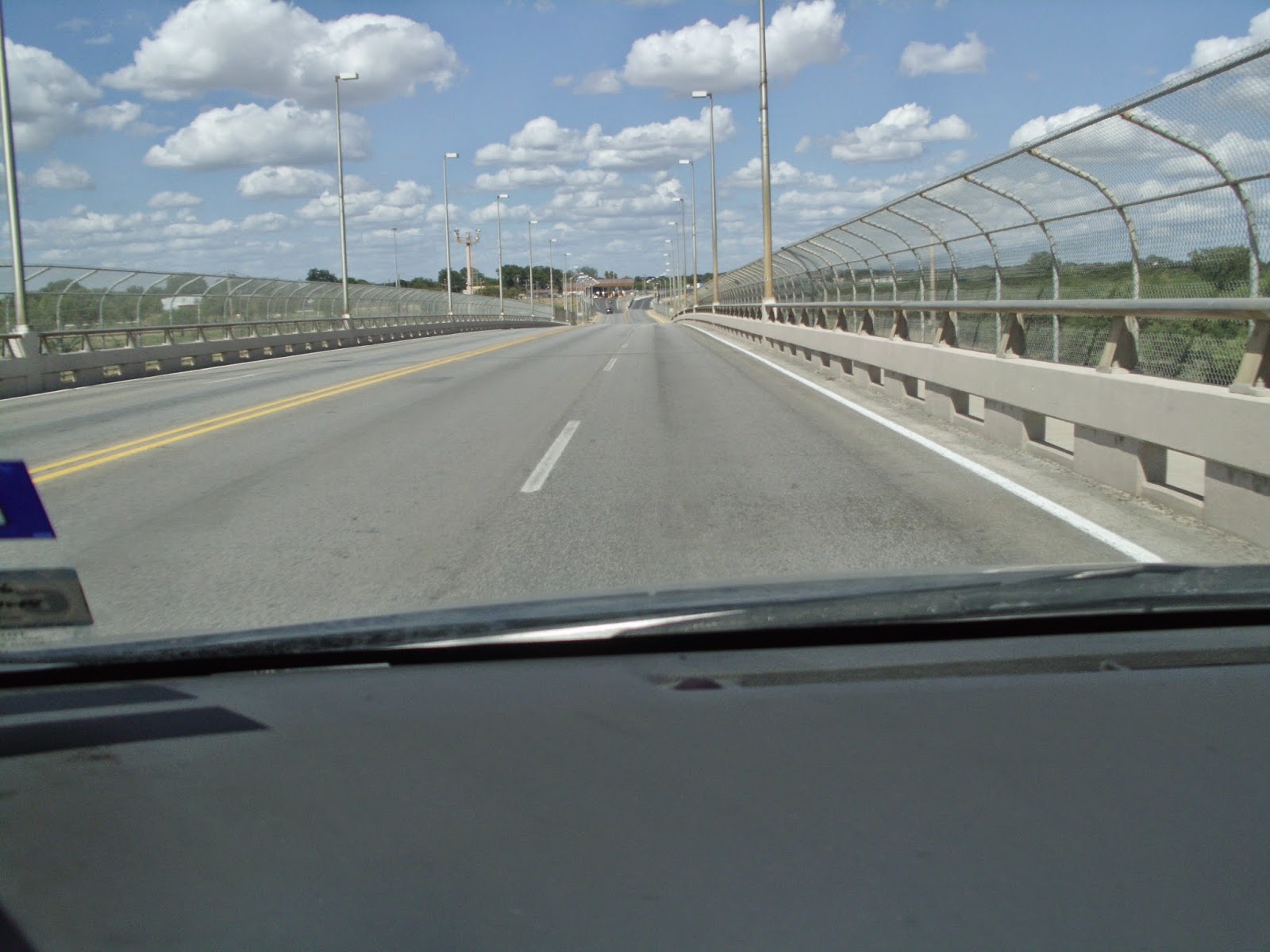 Something you don't seldom see...no lines in American Customs.  Only other traffic were two guys in bicycles which you can not make out on this picture. For some  reason I saw a lot of people in bicycles today both in Ciudad Acuna and in Del Rio. 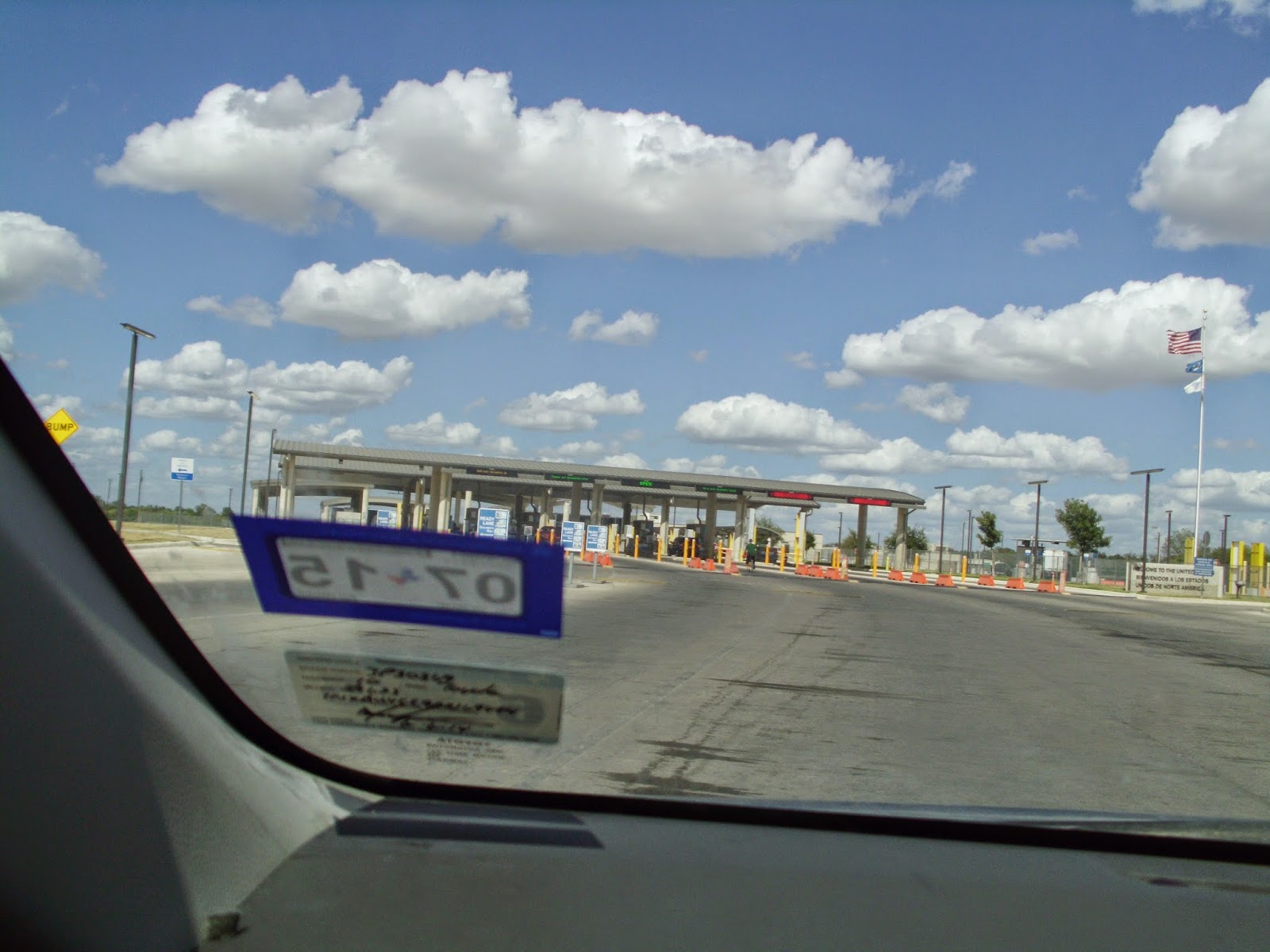 Good night.  May you all have Terlingua Dreams.
Posted by MsBelinda at 9:46 PM