Tuesday I finally made my way to Ciudad Acuña to get my labs done.  I got a late start so the wait for the results was four hours versus the three it usually takes.  I am not complaining as the same tests at Val Verde Regional Medical Center (our local hospital) are over a thousand dollars while in Mexico I paid $1,145.00 Mexican Pesos at an exchange rate of $17.00 pesos for a grand total of $67.35 US dollars.

I had a lot of errands to run so the time flew by. Unfortunately or fortunately depending on your vantage point Ciudad Acuña is experiencing vast growth much like Del Rio. Neither can continue to be categorized as "sleepy border towns".

The parking is a nightmare but at least they did away with parking meters to encourage tourism so the population is no longer subjected to fines...of which I  have been at the receiving end of a couple.  I found an out of the way parking spot and made my way around town on foot.

With the expansion of Ciudad Acuña to the northern part of the city, they moved the Palacio Presidencial (Presidential Palace) out of the downtown district several years ago.  I have featured its modern design on various blog posts in the past.

The former location by the old town square started undergoing a renovation recently. As I walked around I noticed that it was a smaller version of the current Presidental Palace. 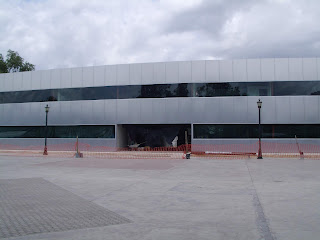 There were vendors set up all around the square but I did not get a chance to check them out.  I am looking for a new cowboy hat as my old Terlingua one has pretty much bit the dust. 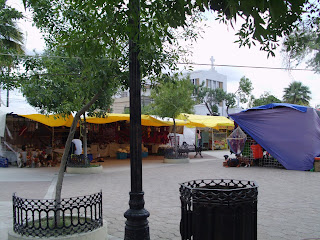 Finally was able to cash in on Tuesday specials of Martes de Cosecha (Harvest Tuesday) at Gutierrez. Even though most people go early there were still crowds in the afternoon with long lines to check out.  Customers were buying cartons of tomatoes, onions, and other produce which leads me to believe that they probably have a small restaurant or taco stand. 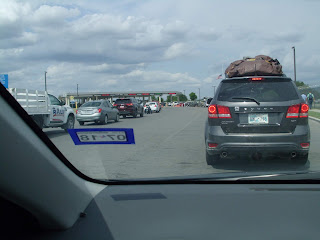 The line back home was long, compounded by the fact that they only had two lanes open...the fast lane with nothing to declare...and a regular one.  They finally opened an additional one when I was about to reach customs and quickly switched lanes. 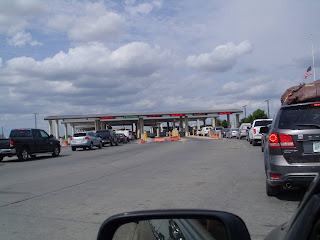 I took some pictures but unfortunately, I can not post them on this computer. I will have to try to do it from my old laptop.  Where is my tall weathered cowboy who is computer savvy?  :-(


Forgot to mention that effective this month the toll rate went up to $4.00 to cross from Del Rio into Ciudad Acuña. That rate is set by the Del Rio City Council. The toll to cross from Ciudad Acuña to Del Rio remains the same $28.00 Mexican Pesos depending on the daily exchange rate about $1.65 USD.

Good night.  May you all have Terlingua Dreams.
Posted by MsBelinda at 6:25 AM

Email ThisBlogThis!Share to TwitterShare to FacebookShare to Pinterest
Labels: Coahuila, Gutierrez, labs in Mexico, Martes de Cosecha, May 2018 trip to Ciudad Acuña, mexico, new Palacio Presidencial in Acuña, where is my TWC?