I have been so busy after the Memorial Day weekend that I have not had a chance to sit down and write a post or for that matter even go online.  I am a Spurs fan and I am ashamed to admit I have not watched a single playoff game this season! Some fan, huh?

Got a new mechanic to fix the brakes in this case non-brakes on Mom’s mini van.  We did not exactly get off on the right foot but at least the van is drivable now though the jury is still out on whether or not I will use him again.

Remember my dollar investment on the Roma tomato plant?  Think I pretty much lost it, jajajaja…even bought some good soil and re-potted it…guess I just have a brown thumb, literally!

Last time I was in Houston, Home Depot had landscape timbers on sale for $1.97 but when I finally made it to the store the special was over.  I was so surprised to see them on sale for only .97 cents each but I need them in Houston not here.  It is times like this that I wish I owned a truck.

With all our comings and goings have not had a chance to call the Maytag guy to fix the washing machine.  Had to make a trip to the Laundromat and boy it was expensive!  Used three large machines and just that was $9.00 plus all the quarters it took to feed the dryers we pretty much spent close to $20.00 bucks.
Walter came around this weekend and he let me pet him for the first time.  I was weed eating when he came over, figured he might get spooked but the sound did not seem to bother him.

His owner came by later to get him and he spoke to my mother.  Wanted to know if the horse was a bother and my mother told him that I had told his son he was welcome here anytime and that since I did not know his name I decided to call him Walter.  Mom said he mumbled Walter? To which she reply “Yes, Walter”.  She also mentioned that I always had fresh cool water for him to drink, hoping he would get the message and do the same.  You go Mom!


We have a new visitor to Terlingua Dreams-Del Rio branch but he only comes to sleep under the cars.  I named him Socks.  I am trying to make friends with him but he wont let me pet him…need him to check out that bathroom/laundry room…but it is not going to be easy to lure him there, maybe a can of tuna? 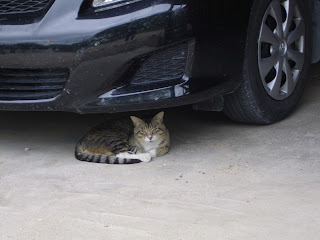 By the way did you have a chance to look at the moon last night?  It was simply spectacular.  Made me think of all the lucky bloggers that live out in Terlingua and how fabulous it must have looked out that way. 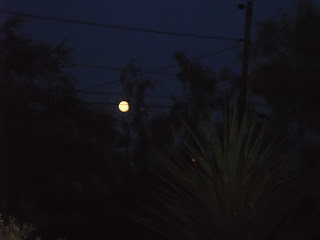 Good night.  May you all have Terlingua Dreams.
Posted by MsBelinda at 11:45 PM