This morning I woke up to the sounds of a loud tractor. Hooray, Pollito finally made an appearance! I did not go outside until he was about to break for lunch.  He said the southern part of the property was still very wet and his tractor kept on slipping. 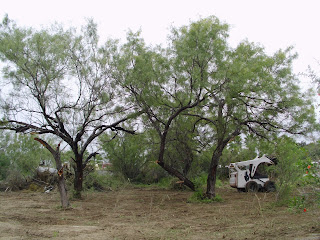 This is when he gave me the bad news that he was going to have to charge me an additional amount as there were more trees than he could see when he first gave me the original estimate. He had filled more truckloads full of debris which in turn increased the fees he had to pay at the landfill. 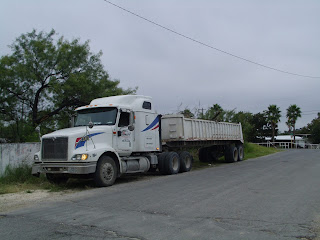 To be fair he did give me a good price. Last year I had gotten an estimate solely based on the southern part as that is where most of the older mesquite trees are located. That figure was more than I am paying to clear the three lots.

I had to go into town to run some errands and when I got back neither Pollito nor his assistant were here. I have no idea when he will be back to complete the job...I am no longer worried about it...Que será, será!

One of the errands I had to run was a trip to a clinic for a free flu shot...I like FREE!  I happened upon this information when I was trying to access the Del Rio newspaper's website for another matter but was not able to do so without having to incur a payment for said information.

Went online to the excellent Mexican newspaper website "El Zocalo" who does not charge a dime and came upon this nugget.  As you recall last year I also happened on a flyer at the post office and I was able to score a free flu shot.

Good night.  May you all have Terlingua Dreams.
Posted by MsBelinda at 12:31 AM