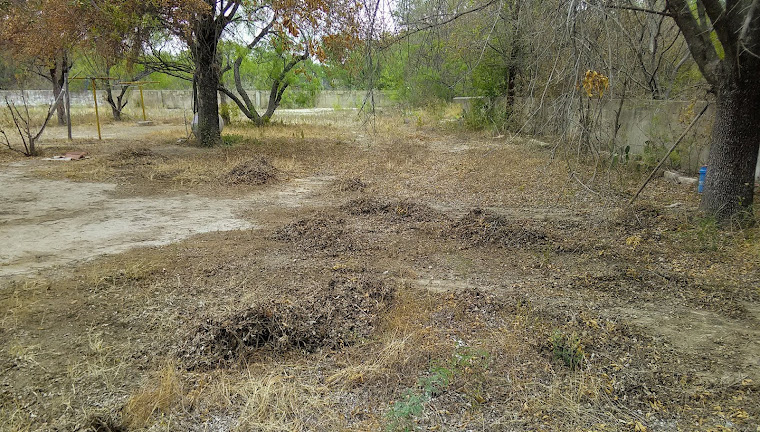 My August started on the wrong foot...

As I mentioned in my last post we had a three-minute shower in the early morning hours. Even though I had worked hard out in the yard it did not translate into a good night's rest. I did not get up early to water the trees figured at least they got some liquid gold and could hold out for a couple more hours.

It was about 9:30 a.m. when I started to water them. I happened to look toward the south where I cleared a pathway to the curve when I noticed there was a black truck deep inside Mom's property...WTH?

Headed that way and saw that no one was inside the truck. Did someone abandon it there?  All of a sudden a short man in a mask walks towards me from the back of the house. It wasn't until I heard him speak that I recognized who it was. It was Pollito's wino sidekick. While he had a mask on he was wearing it wrong not covering his nose. Fortunately, he kept his distance and I backed up even more.

I was FURIOUS!!!  It took an incredible amount of self-restraint to keep my cool. I have a chain and two locks on the front gate to keep people out what more does it take? Apparently, he bypassed it and instead made use of the path I spent hours sweating like a pig to clear.

He said he saw me out in the yard so he came to see if I wanted to have the mesquite trees cut (the baby mesquites) and the yard clippings bagged. I told him the same thing I told Pollito the other day that I did not have any money so I had been doing it myself. That is not true...I just DO NOT want to hire them. I have had enough of these incompetent clowns....grrrrrrrrrrrrrrr!!!

He told me he had all his tools with him and I could pay him whenever...I told him that that was not the way I conducted business. I said that I still had his telephone number and would give him a call if I needed his services.

I also threw in that the last time he came over which I believe was in December 2019...I told him I wanted the trees cut...at the time he had also seen me raking leaves and he wanted to bag them.  I can do that myself. He told me he would be back when he had time...so August 1st...eight months later he comes back?  Pollito has certainly trained him well!

Last week I got an e-mail from HEB letting me know that our prescriptions were ready to be picked up. That can not be right we still have medication. When I was with my previous doctor I told them I did not want to have my prescriptions auto-filled but now with my new doctor the pharmacy once again signed me up?

Today I received another e-mail saying I had 3 days to pick them up or they would put them back in stock. I am NOT going out during the weekend especially not to big HEB...they will have to wait until Monday or whenever I feel like picking them up.

I hope your August 1st went a lot better than mine. Aunty Acid Saying of the Day certainly applied to my situation this morning.

Good night.  May you have Terlingua Dreams.


Aunty Acid Saying of the Day 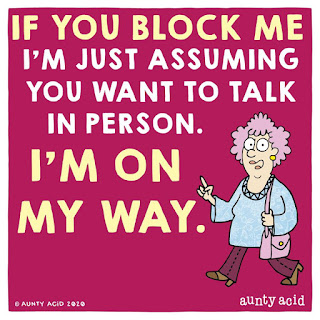 Email ThisBlogThis!Share to TwitterShare to FacebookShare to Pinterest
Labels: black truck parked inside our property, My August 2020 started on the wrong foot, Pollito's wino sidekick